Lost Parodies: Goldeneh Moments from Broadway
A special feature of the biography is a collection of 20 of Sherman's lost parodies of songs from the great Broadway musicals, including "There is Nothin' Like a Lox," "When You Walk Through the Bronx," "Ollawood" ("Camelot"), and "Summertime." 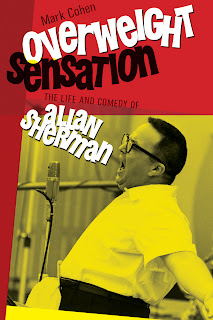 Los Angeles Times
Jewish Daily Forward "exhaustive and gripping new biography"
The Jewish Week, "a most comprehensive and accessible biography"
Library Journal "a well thought-out cultural history of Jewish Americans in the mid- to late 20th century"
Purple Clover  Q&A with author
Talking with Tim Q&A with author
Long Island Newsday Stories here and here.
The Jewish Advocate "Mark Cohen's masterful, critical biography"
The Hollywood Reporter "told with intimate details, an affectionate touch of humanity and lots of his parody lyrics in the well-researched book Overweight Sensation."
BroadwayKingdom Video interview with Mark Cohen
Washington Jewish Week "With his deceptively simple parodies of well-known songs, Sherman was at the head of a new generation of American Jewish entertainers."
Washington Jewish Week Author interview
Chicago Tribune "lively and meticulously researched"
Women's Wear Daily (5/3/13) "An interesting and engaging biography of a complicated man."
Women's Wear Daily (6/4/13) "Unlike many authors, Cohen seemed very much at ease on the podium"
Mark Evanier's blog NewsFromMe "You rarely come away from a portrait of a comedian understanding so totally why he and his work mattered… and how they mattered."
Tabletmag.com "[Allan Sherman] did as much as anyone to bring Jews out of the American pop-culture closet. One can hope that, thanks to Cohen, his legacy is now safe."
JUF News Chicago "The book, like its subject, is both hefty and hilarious."
Pittsburgh Post-Gazette "graceful biography"
Chicago Jewish News "Now, on the 50th anniversary of the release of 'Hello Muddah,' the first complete biography of Sherman casts him as much more than just a fat Jewish funnyman."
The Jewish Journal (Los Angeles) "A penetrating biography by a savvy observer of show business."
J. Weekly (San Francisco Bay Area) "Sherman left behind a storehouse of comic masterpieces, most of them song parodies, many of them on Jewish themes, and almost all of them wickedly clever."
From a blurb for the book by Eric Alterman, co-author of The Cause: The Fight for American Liberalism from Franklin Roosevelt to Barack Obama and The Nation columnist.

"Mark Cohen's Overweight Sensation is a remarkably well-researched, passionately written story of quite nearly tragic proportions. If only for the enduring genius of 'My Son the Folk Singer,' Allan Sherman's story will remain a crucial episode in the annals of satire, of assimilation, of celebrity seduction and (most importantly) of American Jewish culture and history. We are all in Cohen's debt to have it in such telling detail."

"Mark Cohen's Overweight Sensation is a remarkably well-researched, passionately written story of quite nearly tragic proportions."
---Eric Alterman, co-author of The Cause: The Fight for American Liberalism from Franklin Roosevelt to Barack Obama and The Nation columnist.

"Allan Sherman was the original.... before Forbidden Broadway, before Weird Al Yankovic - there was Allan Sherman -- brilliant wit, satirist beyond compare and stand up comic with a melody."
--- Jason Alexander, actor and Seinfeld show star

"Allan Sherman is one of my biggest inspirations and all-time musical heroes."
--- Weird Al Yankovic

"Allan Sherman was instrumental in helping me with my career. He produced my very first record, BILL COSBY IS A VERY FUNNY FELLOW...RIGHT! and also wrote the liner notes."
--- Bill Cosby

"Some of Allan Sherman's parodies were sheer genius. He was droll and under that nerdy exterior lurked a wicked talent."
--- Theodore Bikel