It took me a while to piece it all together, but now it's overwhelming.

Allan Sherman might be the most influential comedian of his time.

This week comic actor Rick Moranis of Ghostbusters released My Mother's Brisket & Other Love Songs. The Jewish song comedy album was based, of course, on Moranis' early exposure to Allan Sherman. 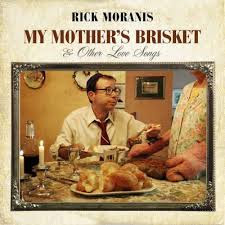 Then I found Jerry Seinfeld on Comedians in Cars talking Sherman with Joel Hodgson.

And then there was Larry David singing Sherman's "Shake Hands With Your Uncle Max."

And of course Seinfeld's Jason Alexander gave me that dynamite blurb for Overweight Sensation, “Allan Sherman was the original. . . . brilliant wit, satirist beyond compare, and stand-up comic with a melody.”

Plus, Alexander recorded "Shake Hands With Your Uncle Max."

Then I found Paul Reiser of the hit series Mad About You telling a journalist that, “One of my greatest moments with my kids is sitting down and listening to ‘Hello Muddah, Hello Fadduh.’ It’s still funny and it still works."

And of course Adam Sandler's famous "Hanukkah Song" has been recognized as "the song put Sandler on a continuum with the likes of Jewish song parodist Allan Sherman."

Not a bad list of Allan Sherman comedy students.

Have I missed anyone?