Just this minute learned that comic movie actor Rick Moranis will release next month an album inspired by his love of Allan Sherman.

The album is called My Mother's Brisket & Other Love Songs. And as he notes in the album review section on Amazon, 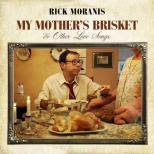 With this album, Moranis goes back to where he started: "When I first began writing jokes and sketches with various Jewish partners one of us would inevitably stop at some point and announce, "Too Jewish!" Too Jewish for the star, the show, the network, or the audience. The songs on this album are all in that category. I grew up hearing the Allan Sherman and the You Don't Have To Be Jewishalbums in the 60s. Now I m in my 60s."