It's been a big week for Allan Sherman's lost lyrics.

There are two song lyrics here, one here, and a really good one here.

But it is hard to top "The Night That Leon Trotsky Died," Sherman's parody of the Irish drinking song, "The Night That Paddy Murphy Died." On the off-chance you don't know the tune, here it is.

Without checking around, I feel it is safe to say there isn't much comedy about the Russian-Jewish revolutionary Leon Trotsky, never mind his assassination in 1940. Sherman's parody defies classification, except that it clarifies his delight in absurdity. Sherman loved wonderful silliness. 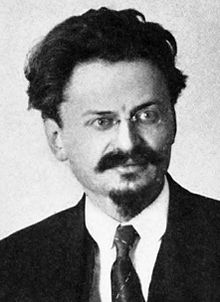 He wrote the parody at the University of Illinois, probably during the 1944-45 academic year. It was never written down anywhere, and I was very lucky to learn of it from comic actor Arte Johnson, most famous for his role on the television show Laugh-In. Johnson knew Sherman at Illinois.

"We all dressed up as Russians and came up through the audience" at a fraternity stunt show, said Johnson. "People screamed because we were so wacky." Johnson sang this to me. Thank you, Arte Johnson.