Allan Sherman and the Hep Cats!

On October 17, 1962, Sherman's My Son, The Folk Singer album had been out for less than two weeks, but it was on fire. Everyone was talking about it, including the hottest lyricists in the business.

Proof came 50 years ago today when one of Sherman's friends from his years as a television producer in New York wrote to Sherman in LA that,

"Ole John Mercer is in town and sends regards; he dug the album the most too."

You gotta love that hep cat lingo. But any amusement is tempered by the fact that Mercer was, in fact, tops. As the Songwriters Hall of Fame website lays it down (that hep lingo is contagious!), "Ask anyone who writes lyrics. Johnny Mercer was a genius."

Sherman agreed, but he was out to topple genius, not revere it. On an unreleased recording of Sherman performing at a Los Angeles house party, he sang a parody of Mercer's "Moon River." It was April 10, 1962, and the night before "Moon River" had won an Academy Award for Breakfast At Tiffany's. Sherman told his audience he thought it was a beautiful song, and also that he "decided to desecrate [it]."

Sherman's parody, "Chopped Liver," was not released until 2005, when an incomplete version appeared on the six-CD set, My Son, The Box. It was an outtake from a 1962 recording session for Sherman's second album, but halfway through Sherman forgot the words. This happened more than once, and he sometimes had to read his own lyrics to remember what he wrote. 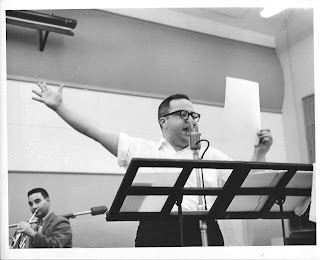 The only complete version of "Chopped Liver" is on the unreleased party tape.

Chopped liver
Rolled up in a ball
Too much cholesterol, they say
You heart breaker
You fat maker
From now on I'm going the safflower way.

You made me
Wider than a mile
Oh, you and your beguiling smell
'Tis time that I bid you goodbye
Your calories are high
Like huckleberry pie
Chopped liver, farewell.