Just got my copy of Social Media Marketing for Dummies and already on page 12 it offered a great suggestion.

Because I'm a social media marketing dummy, I do what it says.

So every Monday I'll be directing you to Allan Sherman sources on the web.

To kick it off, I'll start with one of the best Sherman sources -- Mark Evanier. Mark is a longtime comedy writer, big Sherman fan, and one of the best sources for rare Sherman items.

Here is his amazingly complete Sherman discography from one his many blogs, POVonline. It's the kind of comprehensive list I keep checking to make sure I didn't goof anywhere in my Sherman biography (I did, in one instance, but I'll fix it before the book appears in the spring). 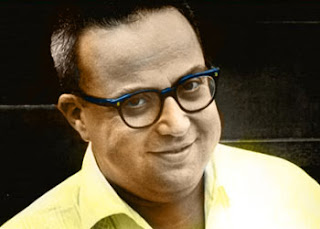 And the above photo of Sherman comes from Mark's story about how Sherman once threatened to sue him for allegedly using Sherman's "Crazy Downtown" parody of Petula Clark's 1965 hit, "Downtown." Mark was in junior high.

It's pretty ironic, because when Sherman was in college he got permission from Richard Rodgers himself to parody songs from Oklahoma! And for my Sherman biography I uncovered several stories of Sherman kindly helping aspiring comedians. But by 1965 he'd been the target of plenty of lawsuits and probably decided he also had to play the game.